Wolverine, a primary member of the X-Men is a playable character in LEGO Marvel Superheroes.

A product of the secret goverment project Weapon X, Wolverine is a mutant possessing retractable adamantium claws and a remarkable healing factor. Though he carries a troubled and bloody past, he joined the X-Men to fight for the protection of both mutants and humans alike.

Wolverine is one of the many heroes that tried to prevent Doctor Doom and his team of villains from creating a weapon of mass destruction.

Wolverine is first seen in The Raft tracking villains that were escaping. He later joins Hulk and Iron Man and together they help defend against many prisoners but many, such as Magneto escape.

Wolverine is also seen defending the helicarrier with other heroes, such as Captain America.

wolverine can use his claws to fix cars by holding x[xbox 360 only] it is unknown if this is a bug.

To unlock Wolverine the player must complete level 4. 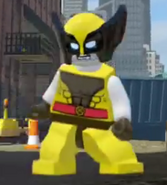 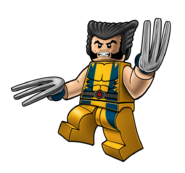 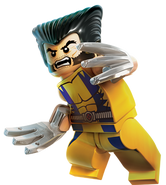 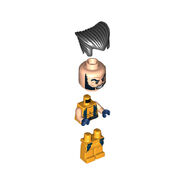 Cool suit
Add a photo to this gallery
Retrieved from "https://legomarveldc.fandom.com/wiki/Wolverine?oldid=23919"
Community content is available under CC-BY-SA unless otherwise noted.