An alien symbiote bonded with journalist Eddie Brock, transforming him into the monstrous Venom. The symbiote granted him super-strength and extrasensory abilities, making him one of Spider'Man's most formidable foes.

Venom makes only one appearance in the story mode of Lego Marvel Superheroes. He hides in the Oscorp Tower, and unexpectedly attacks Black Widow, Hawkeye, and Spider-Man. The heroes easily defeat Venom along with his army of Symbiote Scientists.

only depicted him as a villain. 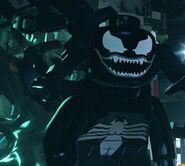 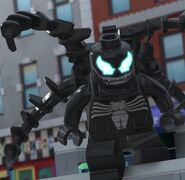 Add a photo to this gallery
Retrieved from "https://legomarveldc.fandom.com/wiki/Venom?oldid=24600"
Community content is available under CC-BY-SA unless otherwise noted.