Swamp Thing is a superhero who protects both the human and plant world. He appears as a playable character in LEGO Batman 3: Beyond Gotham.

Swamp Thing does not have a major role in the story but is thought to have aided the Justice League and other heroes in their struggle to fight against Brainiac and his team of villains.

Swamp Thing is unlocked in the Hall of Doom. 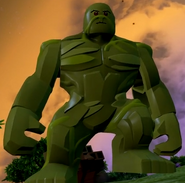 The New 52 Swamp Thing
Add a photo to this gallery
Retrieved from "https://legomarveldc.fandom.com/wiki/Swamp_Thing?oldid=19444"
Community content is available under CC-BY-SA unless otherwise noted.