Superman is one of the many heroes of the Justice League who joined together in order to fight against Brainiac and his team of villains who planned to use the lantern rings to shrink planets into miniature size.

After breaking through Brainiac's ship barrier emitted from his shrink ray, Superman was thrown down to Earth. Superman is then turned giant by Brainiac and the Justice League is forced into battle against their friend. Mind controlled and immensely powerful the Justice League had much difficult taking down Superman. However, after the defeat of the mind controlled Superman, Superman was able to be returned to his normal state and Brainiac's plans came to an end.

Superman (Man of Steel) can be unlocked through purchase of the Man of Steel DLC. 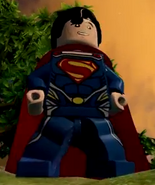 Superman (Man of Steel) in LEGO Batman 3: Beyond Gotham
Add a photo to this gallery
Retrieved from "https://legomarveldc.fandom.com/wiki/Superman_(Man_of_Steel)?oldid=21884"
Community content is available under CC-BY-SA unless otherwise noted.