Superman is a major superhero in LEGO Batman 2: DC Superheroes, LEGO Batman 3: Beyond Gotham, and LEGO DC Super-Villains, who features a huge array of abilities and is a prominent member of the Justice League. He also appears in LEGO Dimensions.

Sent to Earth from the dying planet of Krypton as a baby, Kal-El was found by farmers, Martha and Jonathan Kent. Adopting him as their son, they named him Clark and instilled in him strong moral values. As Clark grew up, the radiation from Earth's yellow sun gave him extraordinary powers including: superhuman strength, speed, and invulnerability. He also has the power of flight as well as X-ray, heat, microscopic, and telescopic vision. As Superman, he is a symbol of truth and justice, devoting his life to the protection of humanity.

Superman is first seen at the Ace Chemicals Plant where the Dynamic Duo are threatened by a large fire. The heroes are aided by Superman who rescues them but leaves once Batman and Robin chase Lex Luthor and Joker through Gotham City. Luthor's LexBots fight the duo, who no longer were aided by Superman, delaying them and giving room for the villains to escape and for the Joker to make fake kryptonite.

Soon after, Luthor and Joker continue to Metropolis, but are followed by Superman and Batman. However the villains outrun them reaching Metropolis, where Luthor quickly constructs a giant robot that resembles Joker. When Superman and Batman find him building a large robot, Luthor reveals that he plans to use all of Joker's gas to control the citizens to follow his command. After finding out that the heroes are alive, Luthor weakens Superman with kryptonite instantly knocking him out. The villain then attempts to shoot Batman but misses and he jumps off the robot and saves Superman. Luthor and Joker are then defeated by the heroes.

Superman, who was still weakened by the kryptonite, was unable to fly and the robot attacks them. The robot nearly defeats the heroes but they are luckily aided by the Justice League and Lex Luthor and Joker are defeated and returned to jail.

Superman is one of the many heroes of the Justice League that joined together in order to fight against Brainiac and his team of villains who planned to use the lantern rings to shrink planets into miniature size.

After breaking through Brainiac's ship barrier emitted from his shrink ray, Superman was thrown down to Earth. Superman is then turned giant by Brainiac and the Justice League is forced into battle against their friend. Mind controlled and immensely powerful the Justice League had much difficult taking down Superman. However, after the defeat of the mind controlled Superman, Superman was able to be returned to his normal state and Brainiac's plans came to an end.

Superman can be unlocked by complete either Level 5 or Level 7 in the storymode.

Superman is unlocked through completion of storymode. 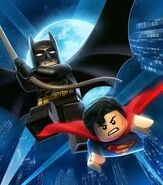 Superman along with Batman 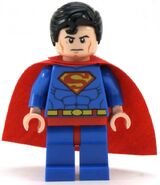 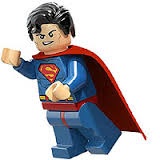 Solar Suit Superman
Add a photo to this gallery
Retrieved from "https://legomarveldc.fandom.com/wiki/Superman?oldid=24560"
Community content is available under CC-BY-SA unless otherwise noted.