Every superhero power except flight

Stan Lee is seen in 50 Stan Lee in Peril Missions in which the player must save Stan Lee from a variety of perilous situations.

Stan Lee's role is just like the last game. He has similar cameos except he has 35 instead of 50. 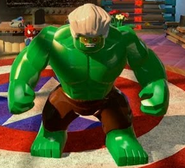 Stan Lee in LEGO Marvel Superheroes
Add a photo to this gallery
Retrieved from "https://legomarveldc.fandom.com/wiki/Stan_Lee?oldid=24540"
Community content is available under CC-BY-SA unless otherwise noted.