Shazam is a member of the Justice League  who appers in LEGO Batman 2: DC Superheroes, LEGO Batman 3: Beyond Gotham, and LEGO DC Super-Villains.

After the death of his parents, young Billy Batson was a troubled orphan until meeting an ancient wizard. Seeing the potential in Billy, the wizard granted him the powers of six gods when he speaks the magic word that transforms him into an adult and the champion of magic. On the outside Billy is Earth's mightiest mortal but on the inside he is still a boy struggling to be worthy of the living lightning of Shazam!

Shazam does not have a major role in the story but is thought to have aided the heroes in their mission to prevent Lex Luthor and Joker from taking over Gotham City.

Shazam does not have a major role in the story but is thought to have aided the heroes in their mission to prevent Brainiac from using the power of the lantern rings to shrink planets into miniature size.

Shazam can be unlocked through purchase of the DLC pack.

LEGO Batman 3: Beyond a Gotham

Shazam can be unlocked in free play. 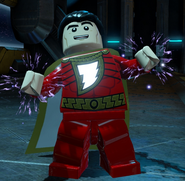 Shazam in LEGO Batman 3: Beyond Gotham

Shazam's alter ego.
Add a photo to this gallery
Retrieved from "https://legomarveldc.fandom.com/wiki/Shazam!?oldid=24119"
Community content is available under CC-BY-SA unless otherwise noted.