The Security Guards are characters known to be found in several LEGO sets both in the Marvel and DC Comics theme. They appear in LEGO Batman: The Videogame.

Security Guards do not have a major role in the story but are thought to have aided the heroes in their mission to prevent the various villains of Gotham City from carrying out their heinous plots.

Security Guards can be unlocked in free play.

Another Guard from the Arkham Asylum Set 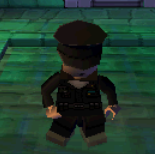 Security Guard in the Portable LEGO Batman: The Videogame

Security Man (A non-playable variation of the Security Guard)
Add a photo to this gallery
Retrieved from "https://legomarveldc.fandom.com/wiki/Security_Guard?oldid=24195"
Community content is available under CC-BY-SA unless otherwise noted.