Scarecrow is an enemy of Batman who appears in all games of the LEGO Batman franchise including LEGO Batman: The Videogame, LEGO Batman 2: DC Superheroes, LEGO Batman 3: Beyond Gotham and LEGO DC Super-Villains.

Scarecrow is one of the villains who aided Mad Hatter, Harley Quinn, and Joker in their plot to take over Gotham City using toxic gas. Scarecrow is one of the villains who the Dynamic Duo had to defeat before proceeding to Joker. Throughout the battle Scarecrow performs several attacks that include the use of his toxic fumes in order to create hallucinations to confuse Batman and Robin.

Scarecrow does not have a major role in the story but is thought to have aided Joker and Lex Luthor in their plan to take over Gotham City.

Scarecrow does not have a major role in the story but is thought to have aided Brainiac in his plan to shrink planets into miniature size by using the power of the lantern rings.

Scarecrow can be unlocked upon completion of the free play.

Scarecrow can be unlocked after defeating him in free roam.

Scarecrow can be unlocked by buying the Dark Knight Trilogy DLC. 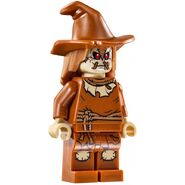 Batman: The Animated Series Scarecrow
Add a photo to this gallery
Retrieved from "https://legomarveldc.fandom.com/wiki/Scarecrow?oldid=24566"
Community content is available under CC-BY-SA unless otherwise noted.