Robin is the sidekick of Batman who is present as a playable character in LEGO Batman: The Videogame, LEGO Batman 2: DC Superheroes, and LEGO Batman 3: Beyond Gotham. He is a member of the Dynamic Duo, and the current leader of the Teen Titans. He appears as a NPC in LEGO Dimensions. He appears in LEGO DC Super-Villains as Red Robin.

Tim Drake was at the circus the day the Flying Graysons were murdered. When Tim was nine years old, he stumbled upon Batman and Robin fighting The Penguin and recognized Robin as Dick Grayson when he saw him perform a complex acrobatic move. He deduced Batman's identity as Dick's adoptive father, Bruce Wayne, and began watching them from afar. After Jason Todd died, he approached Dick, now Nightwing, and tried to convince him to become Robin again. Nightwing refused, but took him to Batman so that Tim could be Robin. Batman wasn't happy with the idea of training Tim, but Nightwing and Alfred convinced him. After assisting in the defeat of Scarecrow, Batman finally deemed Tim was ready to fulfill his role as the new Robin.

In the beginning of this game a group of villains including Riddler, Two Face, Mr. Freeze, Poison Ivy, and Clayface were attempting to perform thievery. After Robin and Batman manage to defeat Clayface, they discover that Riddler got away on Two Face's van. Batman attaches a tracker on the van and tracks the villains down with the help of Robin. The heroes follow the Riddler into Mr. Freeze's base and quickly defeat Mr.Freeze and continue to fight Poision Ivy who rescues Riddler. Batman and Robin defeat Poision Ivy and then defeat Two Face. The last battle is with Riddler, and the heroes at last manage to defeat him as well.

Later, Penguin along with Killer Croc, Man-Bat, Bane, and Catwoman, plotted to take over the city by using several penguin robots. When Batman and Robin reached the sewers they imprisoned Killer Croc. Later the duo challenged Man Bat, who they also defeated. The final battle is with the Penguin and Catwoman. After defeating them the duo moves on to defeat their last enemy Joker.

Joker along with Mad Hatter, Scarecrow, Killer Moth, and Harley Quinn planned to spread chaos. Batman and Robin reach the factory that Joker was operating in and defeats Mad Hatter, however Joker escapes on his helicopter. The news comes that Commissioner Gordon was kidnapped and the heroes rush to the scene to fight Harley Quinn. Once Harley Quinn was defeated Batman fought Joker, the last boss. Eventually the duo defeated Joker and the story ends.

Once the Man of the Year Award is presented to Bruce Wayne, The Joker intervenes. Bruce puts on his batsuit and prepares for battle while Robin arrives to accompany him. Together the heroes battle several villains in the theatre in the following order: Harley Quinn, the Riddler, and Two Face. After imprisoning these villains Batman and Robin realizes that Joker escaped.

Batman and Robin follow Joker into the Gotham Funland, where they battle. Batman manages to imprison Joker but Lex Luthor, using his Deconstructor, frees Joker from Arkham. Joker then frees other villains that the duo is forced to fight along with other heroes such as Superman, Green Lantern, and Wonder Woman. The heroes end up defeating all the villians and re-imprisoning them.

Robin accompanies Batman in the Gotham sewage system and helps him battle Killer Croc. However, once the villain escapes and joins the rest of the Legion of Doom the heroes return to the Batcave.

Later in the Batcave, Robin and Alfred are forced into battle with [Batman after he is hypnotized by Brainiac]. After subduing Batman the heroes venture off to space to the Watchtower. Thereafter, the heroes meet up with the Justice League.

Robin's basic abilities includes boomerangs, basic melee punches/kicks, and grapple, however other abilities are dependent on the suit.

Robin is one of the characters that is unlocked right from the beginning of LEGO Batman: The Videogame as well as LEGO Batman 2: DC Superheroes, and LEGO Batman 3:Beyond Gotham. 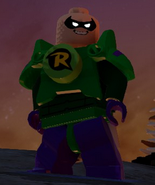 Robin (Hood)
Add a photo to this gallery
Retrieved from "https://legomarveldc.fandom.com/wiki/Robin?oldid=24559"
Community content is available under CC-BY-SA unless otherwise noted.