In the beginning of this game a group of villains including Riddler, Two-Face, Mr. Freeze, Poison Ivy, and Clayface were attempting to perform thievery. After Batman manages to defeat Clayface, he discovers that Riddler escaped on Two Face's van. Batman attaches a tracker on the van and tracks them down. Batman and Robin follows the Riddler into Mr. Freeze's base and quickly defeats Mr.Freeze and continues to fight Poision Ivy who rescues Riddler. Batman defeats Poision Ivy and then defeats Two Face in an extended battle. The last battle is with Riddler, and Batman at last manages to defeat him as well. All the villains end up back in prison and Riddler's plans were foiled by the Dynamic Duo.

In the beginning of LEGO Batman 2: DC Super Heroes, Riddler is one of the numerous villains who raids The Man of the Year award ceremony, the others being Joker, Two-Face, Penguin, and Harley Quinn. When Batman and Robin arrive in the Bat-boat, he flees through the stage trapdoor with Joker, Riddler, and Penguin, only Harley stayed back to cover their flight. She was found and defeated by Batman and Robin.

Riddler is later freed by Joker and Lex Luthor. Two-Face tried to escape the Asylum on his truck with Harley Quinn and Riddler but Batman and Robin arrived to prevent the breakout. He escaped shortly after with even more prisoners.

After defeating Riddler at the top of Wayne Tower, Riddler can be bought for 125,000 studs.

Riddler is unlocked by completing his mission in the Hall of Justice.

The Riddler in LEGO Batman 1

Riddler in the Suit on the Portable LEGO Batman 1

The Riddler in LEGO Batman 2 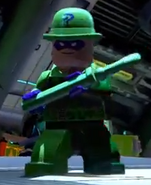 The Riddler in LEGO Batman 3 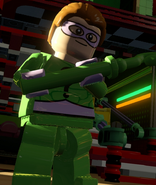 The 1966 Riddler
Add a photo to this gallery
Retrieved from "https://legomarveldc.fandom.com/wiki/Riddler?oldid=22106"
Community content is available under CC-BY-SA unless otherwise noted.