Rhino is seen in the Dinosaur island and serves as one of the major bosses that the player must defeat in order to progress into the following stages. During this boss battle Rhino rams into pumpkins and the player must dodge his oncoming attacks.

Rhino can be unlocked through completion of storymode. 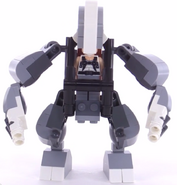 Rhino in 76037 Rhino and Sandman Super Villain Team-up
Add a photo to this gallery
Retrieved from "https://legomarveldc.fandom.com/wiki/Rhino?oldid=23643"
Community content is available under CC-BY-SA unless otherwise noted.