Red Hulk is a villain and a playable character in LEGO Marvel Superheroes and LEGO Marvel's Avengers.

Red Hulk is not directly seen in the gameplay but is thought to come together with Doctor Doom in order to create a weapon of mass destruction.

Red Hulk does not have a major role in the main storymode of LEGO Marvel's Avengers.

Battle Red Hulk and win at a road between West Harlem and Industrial District. Red Hulk can then be bought for 150,000.

Red Hulk can be unlocked in the level Helicarrier Havoc. 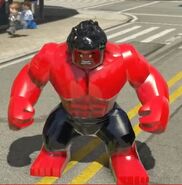 in Sets
Add a photo to this gallery
Retrieved from "https://legomarveldc.fandom.com/wiki/Red_Hulk?oldid=24622"
Community content is available under CC-BY-SA unless otherwise noted.