None
Peter Parker is a playable character in LEGO Marvel Superheroes, LEGO Marvel's Avengers, and LEGO Marvel Super Heroes 2. He is a photographer that works for the Daily Bugle, and the alter ego of the superhero Spider-Man.

Peter Parker is one of the many heroes that join together in order to prevent Doctor Doom and his team of villains from creating a weapon of mass destruction from the shattered remnants of Silver Surfer's board.

Peter Parker is unlocked at the same time you unlock Spider-Man (in the first level of storymode). 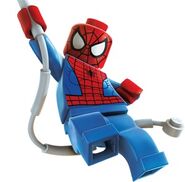 Spider-Man; Peter Parker's hero alias.
Add a photo to this gallery
Retrieved from "https://legomarveldc.fandom.com/wiki/Peter_Parker?oldid=24438"
Community content is available under CC-BY-SA unless otherwise noted.