Penguin is seen putting together a group of villains consisting of Bane, Catwoman, Killer Croc, and Man-Bat. The evil masterminds planned on using penguin robots to terrorize Gotham City. Penguin sends all of his group to plant penguins all around the city area.

Later, Penguin and Bane proceed to the Gotham Docks and steal a satellite in order to help transmit the control signal to the robot penguins planted around the city. Penguin, who had stolen the satellite dish, leaves Bane to deal with the Dynamic Duo.

Shortly after, he and Catwoman steal the Gotham Diamond which was crucial in order to power the controls. The police quickly arrive, and the two villains are forcedly separated. Catwoman attempts to flee but is caught by Batman and Robin.

Penguin searches for Catwoman with Killer Croc but is spotted by the Police and they stop to fight. The Penguin's submarine is destroyed in battle and Penguin and Killer Croc avoid the cops by hiding in the sewers. The villains battle throughout the sewer tunnels and find themselves directly underneath the prison where Catwoman was. Killer Croc smashes into the prison and manages to free Catwoman.

By the time Batman and Robin have reached the villains, Penguin had already finished preparing the device and the penguins conquer Gotham. However the villains are ultimately defeated and Penguin can be seen in his cell extremely angry.

In the second installment Penguin is seen in the first level attacking the Man of the Year Award along with Joker, Harley Quinn, Two Face, and Riddler. Penguin does not fight in the theatre but escapes along with Joker.

Later, Lex Luthor frees Penguin from his jail cell, who then escapes with Poison Ivy and Bane.

Penguin does not have a major role in the story but is thought to have aided Brainiac in his mission to shrink planets into miniature size by using the power of the lantern rings.

Penguin can be found in the Gotham Park Arctic Zoo where he can be fought and later unlocked.

He can be unlocked when you complete his quests. 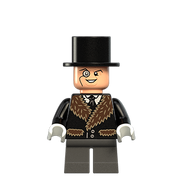 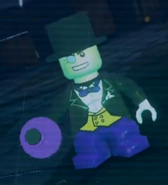 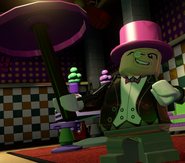 Penguin (1966) in LEGO Batman 3
Add a photo to this gallery
Retrieved from "https://legomarveldc.fandom.com/wiki/Penguin?oldid=24673"
Community content is available under CC-BY-SA unless otherwise noted.