An accidental exposure to Terrigen Mist caused 16-year-old Kamala Khan to discover that she was an Inhuman with shape-changing powers. Adopting the costumed identity of Ms. Marvel in honor of her personal hero Captain Marvel (Carol Danvers), Kamala uses her abilities to fight evil, protect New Jersey, and create her own place in the world. 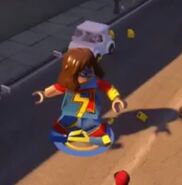 Kamala Khan in her largest form.

Kamala Khan in her smallest form.
Add a photo to this gallery
Retrieved from "https://legomarveldc.fandom.com/wiki/Ms._Marvel_(Kamala_Khan)?oldid=22655"
Community content is available under CC-BY-SA unless otherwise noted.