Set after the events of the first game, Kang the Conqueror is traveling through different timelines and realities, conquering and kidnapping its most famous cities and then uniting them in one place: Chronopolis. Thanks to this, various superheroes are taken from their respective "homes" and brought there, where they must work together to prevent the Conqueror's threat, who plans on taking over not just Chronopolis, but the universe. Along the way, the heroes manage to get a hold of some of Kang's technology, making it possible to age and de-age Groot and summon counterparts. 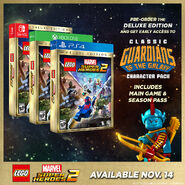 The Deluxe Edition of the game.

Add a photo to this gallery
Retrieved from "https://legomarveldc.fandom.com/wiki/LEGO_Marvel_Super_Heroes_2?oldid=24656"
Community content is available under CC-BY-SA unless otherwise noted.