Killer Frost appears in LEGO Batman 3: Beyond Gotham as DLC, and LEGO DC Super-Villains. The Crystal Frost version has appeared in the portable version of LEGO Batman 2: DC Superheroes.

While working on a S.T.A.R. Labs experimental thermodynamic engine, Dr. Caitlin Snow became the victim of industrial sabotage. She survived the incident but at the price of needing to siphon body heat from others to stay alive. Driven by insatiable hunger, she became the villain Killer Frost, until Batman recognized her inherent goodness. Given the chance to redeem herself, she now struggles to keep her terrible hunger under control while making a difference.

Killer Frost does not have a major role in the story but is thought to have aided Brainiac in his quest to shrink planets into miniature size.

Killer Frost is part of the Heroines and Villainesses DLC. 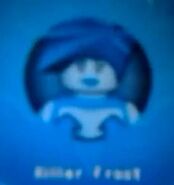 Killer Frost (Crystal Frost) on the DS version of LEGO Batman 2
Add a photo to this gallery
Retrieved from "https://legomarveldc.fandom.com/wiki/Killer_Frost?oldid=24489"
Community content is available under CC-BY-SA unless otherwise noted.