Killer Croc is a villain and playable character in LEGO Batman: The Videogame, LEGO Batman 2: DC Super Heroes, LEGO Batman 3: Beyond Gotham, and LEGO DC Super-Villains. He is a member of the Legion of Doom and an enemy of Batman.

Upon escape from prison, the villain Killer Croc joins with Penguin in his plot to take over Gotham City with an army of robotically engineered penguins armed with artillery.

Croc is later seen arming a box filled with penguins nearby to the Gotham Docks. Killer Croc then agrees with Penguin to attempt to rescue Catwoman from the prison. The two of them find themselves face to face with the Dynamic Duo. However they manage to fend off the heroes and pull off an escape.

Shortly after, the duo has sprung Catwoman from the police station, Croc is forced to be left behind by Catwoman in order to slow the duo down. This time Batman and Robin are able to return Killer Croc behind bars.

In LEGO Batman 3 he is a member of the Legion of Doom, but ends up aiding the Justice League in defeating Brainiac 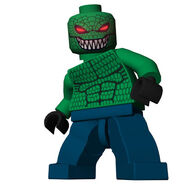 Killer Croc in LEGO Batman 3
Add a photo to this gallery
Retrieved from "https://legomarveldc.fandom.com/wiki/Killer_Croc?oldid=24672"
Community content is available under CC-BY-SA unless otherwise noted.