Jor-El is the father of Superman and the husband of Lara Lor-Van who appears in LEGO Batman 3: Beyond Gotham.

Jor-El does not have any direct appearance in the story but is thought to have aided the Justice League in their mission to defend against Brainiac and his forces.

Jor-El is part of the Man of Steel DLC. 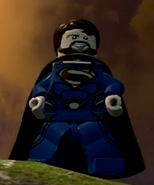 Jor-El in LEGO Batman 3
Add a photo to this gallery
Retrieved from "https://legomarveldc.fandom.com/wiki/Jor-El?oldid=17895"
Community content is available under CC-BY-SA unless otherwise noted.