Joker is a major villain in LEGO Batman: The Videogame, LEGO Batman 2: DC Superheroes and archenemy of Batman. However, he aids the Justice League in LEGO Batman 3: Beyond Gotham. He is a playable character in LEGO DC Super-Villains. He also appears in LEGO Dimensions.

The Joker's past is shrouded in mystery, with no one really knowing who he was or how he became the Joker. One origin Joker claims to have had is that he was once a former chemical engineer turned failed comedian, who posed as The Red Hood during a failed heist to support his pregnant wife, Jeannie. When trying to escape Batman, Jack fell into a vat of toxins which turned his hair green, bleached his skin white, stained his lips red, and stretched them out into an everlasting smile; it gave him the appearance of a crazed clown. Driven insane by this reflection and the death of Jeannie, he renamed himself The Joker.

Joker is seen shortly after the defeat of Penguin and his team of villains, trying to create havoc across Gotham City. The Dynamic Duo jump into action and try to defeat Joker's team including Harley Quinn, Mad Hatter, Scarecrow, and Killer Moth. Joker plans to attack Gotham using gas. Joker begins to initiate his plans by going to a chemical factory along with Mad Hatter in order to create the venom. Soon after which, Joker along with Harley Quinn capture Commissioner Gordon in order to lure Batman and attempt to defeat him. Batman and Robin then engage in an aerial battle, however both planes crash into Gotham Art Gallery. Killer Moth eventually aids Joker to reach the Gotham Cathedral in order to plant the bombs. Batman arrives to the scene before Joker could do any damage. Batman rung a bell which released a hoard of screeching bats distracting the villains until the police arrived. Joker is last seen in Arkham Asylum.

Joker again is found in LEGO Batman 2 as one of the two main antagonists the other being Lex Luthor. Joker is found attacking the Man of the Year award along with Two Face, Penguin, Riddler, and Harley Quinn. Once Batman and Robin imprison Joker, Lex Luthor frees Joker and plans to use his laughing gas for his own needs. Joker agrees to aid Lex Luthor with his plans and together they free many other inmates.

While the Dynamic Duo fight with the other escaped criminals, the Joker and Luthor invade the Ace Chemicals Plant and cause a large fire, which attracts Batman and Robin to investigate. The heroes are aided by Superman who rescues them but leaves once Batman and Robin chase Lex Luthor and Joker through Gotham City. Luthor's LexBots fight the duo delaying them and giving room for the villains to escape and for the Joker make fake kryptonite. Batman and Robin fight past the LexBots and confront the villains but they are quickly thrown away. Batman steals a small amount of the fake kryptonite and takes it with him to the Batcave, where he finds out it is actually tracking device, soon after which, Lex Luthor and the Joker attack the Batcave leaving it in flames.

Luthor and Joker continue to Metropolis, but are followed by Superman and Batman. However the villains outrun them reaching Metropolis, where Luthor quickly constructs a giant robot that resembles Joker. When Superman and Batman find him building a large robot, Luthor reveals that he plans to use all of Joker's gas to control the citizens to follow his command. After finding out that the heroes are alive, Luthor weakens Superman with kryptonite instantly knocking him out. The villain then attempts to shoot Batman but misses and he jumps off the robot and saves Superman. Luthor and Joker are then defeated by the heroes.

Superman, who was still weakened by the kryptonite, was unable to fly and the robot attacks them. The robot nearly defeats the heroes but they are luckily aided by the Justice League and Lex Luthor and Joker are defeated and returned to jail.

Joker is among the Legion of Doom who kidnapped Hawkman and continued to the Watchtower where he planned to hold the Justice League ransom in order to make Lex Luthor president.

However, upon arrival, Joker realized that he needed to aid the heroes in the struggle against Brainiac who planned to use the lantern rings in order to shrink planets into miniature size.

The Joker will be unlocked after completion of the first mission in the third villain episode.

The Joker can be unlocked after completion of Story Mode. The player must go to Ace Chemicals and battle Joker. Once Joker is defeated he can be bought for 250,000 studs. 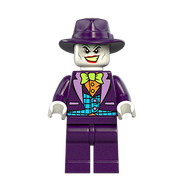 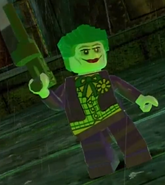 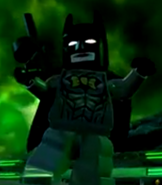 Brickheadz
Add a photo to this gallery
Retrieved from "https://legomarveldc.fandom.com/wiki/Joker?oldid=24535"
Community content is available under CC-BY-SA unless otherwise noted.