Wounded, captured and forced to build a weapon by his enemies, billionaire industrialist Tony Stark instead created an advanced suit of armor to save his life and escape captivity. Now with a new outlook on life, Tony uses his money and intelligence to make the world a safer, better place as Iron Man.

Iron Man commonly appears throughout the gameplay and is present in the very first level. In the first level Iron Man along side Hulk attempt to rid Grand Central Station of Sandman and Abomination. Hulk effortlessly takes down Abomination but Sandman retreats. Spider-Man arrives and aids in the defeat of Sandman. After defeating Sandman, Iron Man continues to his next mission in The Raft.

Iron Man teams up with Hulk in order to head to the raft. They meet Wolverine along the way and together they battle Whiplash, Leader, and Sabretooth, who then proceed to Red Skull, Rhino, Loki, and Mandarin. Eventually Magneto arrives and destroys Iron-Man's suit and Wolverine battles Sabretooth while Hulk battles Abomination again. They manage to fight off most of the villains but Magneto escaped.

Captain America then teams up with Iron-Man to go to Stark Towers only to find the entire place hacked. Captain America and Iron-Man then head on to battle Aldrich Killian and the Mandarin. Mandarin steals Iron-Man's Hulkbuster Armor, however Iron-man and his other suits were able to defeat Mandarin. Iron-Man and Thor track down Doctor Doom at the submarine. Spider-Man along with Jean Grey arrive to help out. They manage to defeat M.O.D.O.K but the submarine begins to sink. Luckily, the team was able to escape but were thrown into an island by Magneto.

Afterwards, Iron-Man defeats Magneto using his Stark Jet. With only two villains left the team splits up. Thor and Iron-Man defeat Loki, who reveals his plan to destroy the world with Galactus. With no choice left, Nick Fury assembles a team of heroes and villains alike to defeat Galactus.

Iron Man's most basic and general ability is to shoot projectiles, which every suit has the ability to do. A few suits like Mark 42 can shoot two types of projectiles. Most suits also have the ability to either fly or hover. Most of Iron Man suits are minifigures.

Each suit has a different way to unlock refer to each costume page to find how to unlock the specified character. 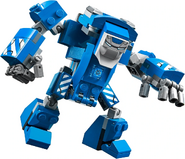 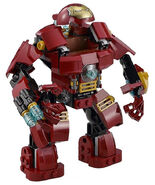 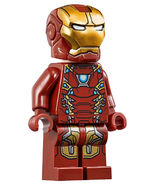 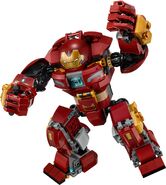 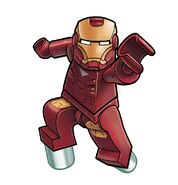 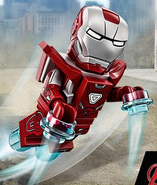 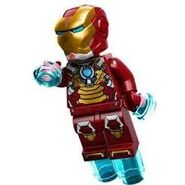 Hulkbuster in LEGO Marvel Superheroes
Add a photo to this gallery
Retrieved from "https://legomarveldc.fandom.com/wiki/Iron_Man?oldid=24736"
Community content is available under CC-BY-SA unless otherwise noted.