Hawkman is one of the many heroes who team together in order to defeat Brainiac who planned to use the combined powers of the lantern rings in order to shrink planets into miniature size.

Hawkman was also trapped into a cage by Lex Luthor and the rest of the Legion of Doom. He was not freed until much of the storymode was over.

Hawkman (New 52) can be unlocked by beating a parrot in a race inside the Hall of Justice. 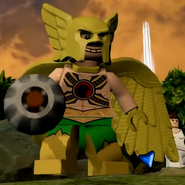 The New 52 Hawkman in LEGO Batman 3
Add a photo to this gallery
Retrieved from "https://legomarveldc.fandom.com/wiki/Hawkman_(New_52)?oldid=16575"
Community content is available under CC-BY-SA unless otherwise noted.