Hawkeye is a playable character in LEGO Marvel Superheroes and LEGO Marvel's Avengers. He is also an active member of the Avengers who is featured in a few LEGO sets.

Hawkeye is one of the many heroes that come together in order to help defend against Doctor Doom and his army of villains.

Hawkeye is first seen alongside Black Widow chasing Green Goblin into Oscorp Tower. Upon entering the duo discover that they had been set up into a trap and were forced to face Venom. The heroes quickly defeat the villain but are too late to capture Green Goblin, who escapes.

Hawkeye and Black Widow are called into action once more to investigate the H.Y.D.R.A Base. The heroes face Red Skull in the base and manage to defeat him.

Hawkeye inside a jet. 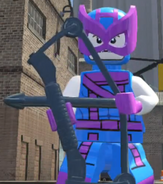 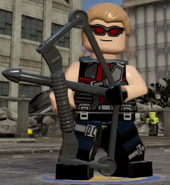 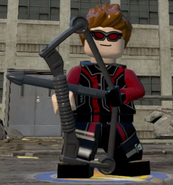 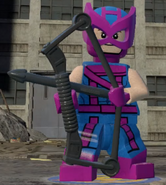 Classic Hawkeye in LEGO Marvel's Avengers
Add a photo to this gallery
Retrieved from "https://legomarveldc.fandom.com/wiki/Hawkeye?oldid=24781"
Community content is available under CC-BY-SA unless otherwise noted.