Harley Quinn is an enemy of Batman who alongside Joker, the man she loves, attempted to take over Gotham. She appears in LEGO Batman: The Videogame, LEGO Batman 2: DC Superheroes, LEGO Batman 3: Beyond Gotham and LEGO DC Super-Villains. She also appears as a playable character in LEGO Dimensions.

Obsessed with curing the institutionalized Joker, Dr. Harleen Quinzel found herself falling under the seductive spell of the criminal genius. Spiraling into madness herself, she helped him escape and joined his life of crime, only to be abandoned by the fickle madman. Unstable and unpredictable, Harley Quinn doesn't have quite the homicidal streak as her ex-boyfriend, but she's proof that love can make anyone a little crazy.

Harley Quinn is seen aiding Joker, Scarecrow, and many other villains in their plot to take over Gotham City using laughing gas. She is one of the bosses that the Dynamic Duo are forced to fight shortly before the main boss battle of the game against Joker.

Harley Quinn is the first boss that Batman and Robin battle in the stage the Man of the Year Award Hotel.

Harley Quinn does not have a major role in the story but is thought to have aided Brainiac in his quest to shrink planets into miniature size.

Harley Quinn is unlocked through completion of the storymode.

Harley Quinn is unlocked by defeating her in free roam.

Harley Quinn is unlocked by completing her second mission in the Hall of Doom. 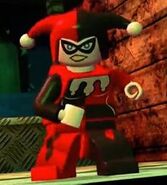 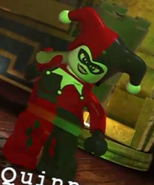