Green Loontern is a playable Green Lantern character in the game LEGO Batman 3: Beyond Gotham.

Green Loontern does not have a major role in the story but is thought to have been one of the lanterns kidnapped by Brainiac who planned to use their powers to shrink planets into miniature size.

Green Loontern can be unlocked after completing all of his tours in all hub planets. 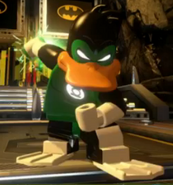 A Better look at Green Loontern
Add a photo to this gallery
Retrieved from "https://legomarveldc.fandom.com/wiki/Green_Loontern?oldid=22248"
Community content is available under CC-BY-SA unless otherwise noted.