Green Goblin (Ultimate) is the big-figure variation of Green Goblin, who is a villain of Spider-Man.

Green Goblin is seen in his minifigure form in the story mode. He is one of the many villains who teams with Doctor Doom to create a weapon of mass destruction.

Green Goblin is first seen taking the Cosmic Brick from Doctor Octopus, who had failed to keep it away from the heroes. Green Goblin then proceeds to Oscorp Tower where he distracts the heroes using Venom. The heroes arrived too late to stop Green Goblin but they managed to defeat him soon after in Doom's Castle.

To unlock Green Goblin (Ultimate), the player must find his character token in Deadpool's secret mission The Thrill of the Chess. 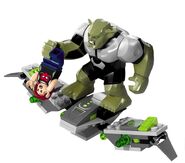 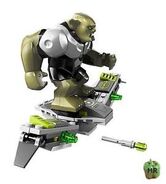 Add a photo to this gallery
Retrieved from "https://legomarveldc.fandom.com/wiki/Green_Goblin_(Ultimate)?oldid=24506"
Community content is available under CC-BY-SA unless otherwise noted.