Green Arrow is a superhero who appears in LEGO Batman 2: DC Superheroes, LEGO Batman 3: Beyond Gotham, LEGO Dimensions and LEGO DC Super-Villains. He is also an active member of the Justice League.

After being betrayed and stranded on a remote island spoiled billionaire Oliver Queen was forced to survive with a crude bow and arrow. When he eventually discovered a band of criminals exploiting the island's natives he used his jungle-honed skills to stop the abuse and found a purpose in life. Returning to civilization Queen became the Green Arrow, a 'robin hood' persona that belies an unerring commitment to justice for the people.

Green Arrow is one of the Justice League members that teamed up in order to prevent Brainiac from using the power of the lantern rings to shrink planets into miniature size.

Green Arrow can be unlocked in the portable version by completing Justice League Missions.

Green Arrow can be unlocked through free play. 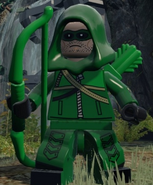 Green Arrow poster.
Add a photo to this gallery
Retrieved from "https://legomarveldc.fandom.com/wiki/Green_Arrow?oldid=23769"
Community content is available under CC-BY-SA unless otherwise noted.