The Flash is a superhero who works alongside with the Justice League in order to help stop Lex Luthor and Joker in LEGO Batman 2: DC Superheroes. He also appears in LEGO Batman 3: Beyond Gotham, and LEGO DC Super-Villains. He appears as an NPC in LEGO Dimensions. He has been featured in various LEGO sets.

In a freak lab accident, forensic scientist Barry Allen was struck by lightning while doused with chemicals giving him the super powers of the Speed Force. Now he races up buildings, across oceans, and around the world at light speed, as The Flash. While The Fastest Man Alive is constantly moving at top speed, his eyes are always focused on his goal: catching criminals and locking them away... in a flash!

The Flash is called to missions by Martian Manhunter and is seen in one mission defeating Lex Luthor with his fellow Justice League members such as Wonder Woman and Green Lantern. In one such mission The Flash helps round up civilians to safety in Wayne Tower.

Flash along with the rest of the Justice League defend the Watchtower from the Legion of Doom. However, when Brainiac appears Flash and the Leage is forced to join forces with their enemies in order to face the upcoming threat. 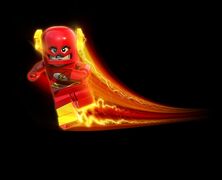 Add a photo to this gallery
Retrieved from "https://legomarveldc.fandom.com/wiki/Flash?oldid=24486"
Community content is available under CC-BY-SA unless otherwise noted.