Electro is a enemy of Spider-Man and a playable character in LEGO Marvel Superheroes, who is featured in a few LEGO Marvel Sets.

Electro is not directly seen throughout the story mode but is thought to have teamed with Doctor Doom and aid him in creating a weapon of mass destruction from the remains of Silver Surfer's board.

Find the bank and do the secret mission in which the player must prevent Electro from stealing the money. 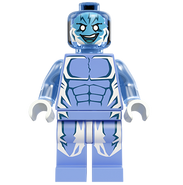 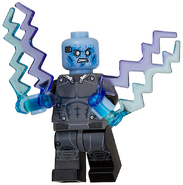 Electro (Ultimate) in LEGO Marvel Superheroes
Add a photo to this gallery
Retrieved from "https://legomarveldc.fandom.com/wiki/Electro?oldid=24527"
Community content is available under CC-BY-SA unless otherwise noted.