This page refers to the non-playable character. For the playable minifigure visit: Destroyer (Minifigure)

The Destroyer is a enemy summoned by Loki who appears in LEGO Marvel Superheroes.

While in Asgard the heroes including Human Torch, Captain America, Wolverine and Thor are forced into battle with the Destroyer prior to defeating Loki. The heroes combined their powers in order to defeat the Destroyer however, Loki managed to escape. 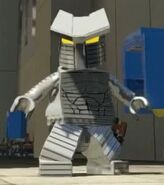 Destroyer as a playable character.
Add a photo to this gallery
Retrieved from "https://legomarveldc.fandom.com/wiki/Destroyer?oldid=16795"
Community content is available under CC-BY-SA unless otherwise noted.