Deathstroke is a mercenary and an enemy of the Justice League, Teen Titans and Green Arrow in LEGO Batman 2: DC Superheroes and LEGO Batman 3: Beyond Gotham.

While serving in elite covert ops unit Team 7, Slade Wilson volunteered for an experiment to create a super-solider. The other test subjects died, but Wilson's mind and body were dramatically enhanced. After Team 7 was dissolved, an embittered Wilson used his lethal skills to become a mercenary, establishing himself as the world's deadliest assassin. Ruthless and unscrupulous, Wilson is a killer who fulfills his contracts no matter what.

Deathstroke does not have a major role in the story but is thought to have aided Joker and Lex Luthor in their mission to take over Gotham City.

Deathstroke does not have a major role in the story but is thought to have aided Brainiac in his quest to shrink planets into miniature size.

Deathstroke is unlocked through completion of free play in the portable version.

Deathstroke is unlocked In the level Big Trouble In Little Gotham.

Deathstroke in LEGO Batman 3: Beyond Gotham 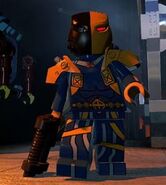 Slade Wilson the alter ego of Deathstroke
Add a photo to this gallery
Retrieved from "https://legomarveldc.fandom.com/wiki/Deathstroke?oldid=24616"
Community content is available under CC-BY-SA unless otherwise noted.