Deadpool is an anti-hero who appears in LEGO Marvel Superheroes.

Deadpool makes several cameos throughout the story. For example he is seen at one point falling down an elevator at Oscorp. Several other cameos also exist outside of the story in his mini missions in the free roam. However, Stan Lee still has more appearances than Deadpool.

Deadpool is unlocked late in the game after completing his missions in his free roam which can be unlocked after all Deadpool missions are completed.

Deadpool sliding down a tightrope. 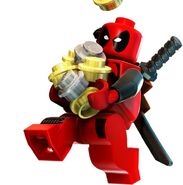 Deadpool holding a pile of coins.

Deadpool in his office.
Add a photo to this gallery
Retrieved from "https://legomarveldc.fandom.com/wiki/Deadpool?oldid=23262"
Community content is available under CC-BY-SA unless otherwise noted.