Cyclops an active member of the X-Men and playable character in LEGO Marvel Super Heroes is a character that possesses the ability of heat/laser vision.

Scott Summers is a mutant with the ability to harness energy and direct it through his eyes to deliver blats of concussive force. Scott wears a visor made of ruby quarts in order to control his potentially devastating gaze.

Cyclops is seen fighting with fellow heroes in order to help stop Doctor Doom and his team of villains from creating weapons of mass destruction from the remains of Silver Surfer's board.

He is seen in one mission working side-by-side with fellow X-Men, Jean Grey, in order to defend the X-Mansion. 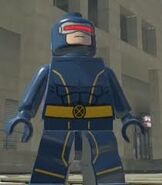 Cyclops (Astonishing) in LEGO Marvel Superheroes
Add a photo to this gallery
Retrieved from "https://legomarveldc.fandom.com/wiki/Cyclops?oldid=24419"
Community content is available under CC-BY-SA unless otherwise noted.