Cyborg is one of the many protagonists in the games LEGO Batman 2: DC Superheroes, LEGO Batman 3: Beyond Gotham, and LEGO DC Super-Villains. He also appears in LEGO Dimensions. He is an active member of the Justice League.

Football star Victor Stone's athletic accomplishments were ignored by his scientist father until an experiment with alien technology went horribly wrong, leaving Vic's body shattered. In a desperate attempt to save his son's life, the elder Stone fused Vic's body with exotic technologies from S.T.A.R. Labs top secret Red Room. By coming to terms with being half-machine, Stone became a true hero and more human than ever.

In the storymode Cyborg is one of the heroes monitored by Martian Manhunter.

His first main appearance in the storymode was when Lex Luthor and Joker attacked Wayne Tower with the kryptonite mech. Cyborg, along with Batman, Superman, Wonder Woman, and Green Lantern, participated in the effort to defeat the villains at Wayne Tower once and for all.

Cyborg can be unlocked with no purchase after completion of the story mode. 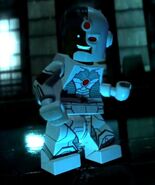 Cyborg in the portable version of LEGO Batman 2: DC Superheroes

Cyborg in LEGO Batmam 3: Beyond Gotham
Add a photo to this gallery
Retrieved from "https://legomarveldc.fandom.com/wiki/Cyborg?oldid=24282"
Community content is available under CC-BY-SA unless otherwise noted.