Clayface is an enemy of Batman who only appears in LEGO Batman: The Videogame and LEGO Batman 2: DC Superheroes.

In the beginning of the game a group of villains including Clay Face, Two-Face, Mr. Freeze, Poison Ivy, and Riddler were attempting to perform thievery. After Batman manages to defeat Clayface, he discovers that Riddler got away on Two Face's van. Batman attaches a tracker on the van and tracks them down. Batman follows the Riddler into Mr. Freeze's base and quickly defeats Mr. Freeze and continues to fight Poison Ivy who rescues Riddler. Batman defeats Poision Ivy and then defeats Two-Face. The last battle is with Riddler, and Batman at last manages to defeat him as well.

Clayface does not have a large role in the story mode. However Clayface was one of the many villains rescued from prison by Joker and Lex Luthor.

In LEGO Batman: The Videogame Clayface can be unlocked through free play of the storymode levels.

In LEGO Batman 2: DC Superheroes, Clayface can be unlocked by defeating him in battle in Gotham City. 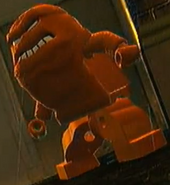 Clayface in LEGO Batman 2
Add a photo to this gallery
Retrieved from "https://legomarveldc.fandom.com/wiki/Clayface?oldid=24448"
Community content is available under CC-BY-SA unless otherwise noted.