Captain America is first seen helping Mr. Fantastic near Baxter Building, which was, at the time, invaded by the villain Doctor Octopus. They are later joined by the superhero Spider-Man, who accompanies them. The three heroes succeed in defeating Doctor Octopus, but, unfortunately, the cosmic brick was stolen by the Green Goblin.

Following this event, Human Torch and Captain America leave to meet up with Wolverine as well as Thor in order to face Loki in Asgard. The team arrives at Bifrost Bridge and quickly learn that Loki is aided by Frost Giants. They end up having to fight Loki's Destroyer armor while Loki escapes leaving the Tesseract.

Captain America continues his journey and teams with Thing in order to head towards Magneto. Black Widow helps transport them to the island, where Captain America and Thing could find Magneto and his army. Later,Storm arrives to help the team defeat Rhino and Mystique, who was disguised as Magneto. The real Magneto escapes but the heroes manage to sneak away with him.

The team is then joined by Spider-Man to help fight Doctor Doom and Loki. They defeat Dr. Doom but Loki reveals his true plans of releasing Galactus upon Earth. With no choice left Nick Fury assembles a team of villains and heroes in order to defeat the upcoming threat. 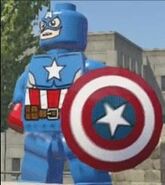 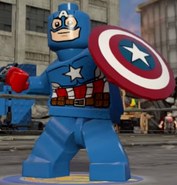 Classic Captain America in LEGO Marvel's Avengers
Add a photo to this gallery
Retrieved from "https://legomarveldc.fandom.com/wiki/Captain_America_(Classic)?oldid=24235"
Community content is available under CC-BY-SA unless otherwise noted.