Black Widow, an active member of S.H.I.E.L.D., is a playable character in LEGO Marvel Superheroes and LEGO Marvel's Avengers.

One of the most dangerous and prolific S.H.I.E.L.D. agents, Natasha Romanoff, aka The Black Widow, made a name for herself as an unequaled operative in the intelligence world. Originally assigned to the Avengers by Director Fury, Widow has since become a full-time member of the heroic team, putting her unparalleled talents to work in the service of mankind.

Black Widow is one of the many heroes that team up to help stop Doctor Doom from creating a weapon of mass destruction.

After the battle with Doctor Octopus Black Widow and Hawkeye are called into action in order to help chase Green Goblin, however they fall right into Green Goblin's trap and are forced to face Venom. Luckily, Spider-Man helps the duo defeat Venom but Green Goblin escapes on his Pumpkin Chopper.

Soon after, Hawkeye and Black Widow are called to investigate in the H.Y.D.R.A base. Here, they find the Red Skull and Arnim Zola. Human Torch arrives but is knocked out by Loki. Captain America joins the battle and helps the heroes defeat the remaining opponents.Black Widow later appears to head to Asteroid M.

Black Widow crashing through a window. 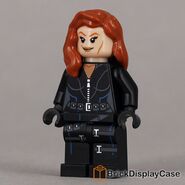 Age of Ultron Black Widow in LEGO Marvel's Avengers.
Add a photo to this gallery
Retrieved from "https://legomarveldc.fandom.com/wiki/Black_Widow?oldid=24776"
Community content is available under CC-BY-SA unless otherwise noted.