Black Manta is the arch-enemy of Aquaman featured in LEGO Batman 2: DC Superheroes and LEGO Batman 3: Beyond Gotham.

At some point in the past, he has teamed up with Black Adam which is seen in a news article within the game. Apart from this Black Manta does not play a role in the story.

Black Manta does not play a major role in the story but is thought to have either teamed with Brainiac or the Legion of Doom.

Black Manta can be unlocked for free upon purchase of the Villains DLC Pack.

Black Manta can be unlocked by completing the Bat-Mite quest in the level Pursuers in the Sewers. 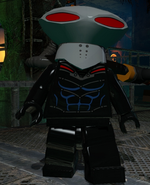 Black Manta in LEGO Batman 3: Beyond Gotham
Add a photo to this gallery
Retrieved from "https://legomarveldc.fandom.com/wiki/Black_Manta?oldid=21686"
Community content is available under CC-BY-SA unless otherwise noted.