The Batman (Electricity Suit) is a playable suit in both LEGO Batman 2: DC Superheroes and LEGO Batman 3: Beyond Gotham.

Batman (Elecricity Suit) can be unlocked through completion of storymode. 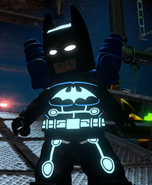 The Batman (Electricity Suit) in LEGO Batman 3: Beyond Gotham
Add a photo to this gallery
Retrieved from "https://legomarveldc.fandom.com/wiki/Batman_(Electricity_Suit)?oldid=23047"
Community content is available under CC-BY-SA unless otherwise noted.