Batman (1966) is a variation of Batman that appears in LEGO Batman 3: Beyond Gotham.

Batman (1966) is seen in his standard outfit as one of the many heroes who joined forces with other members of the Justice League in order to defeat Brainiac before he could shrink the planets into miniature size using the powers of his captured lanterns. 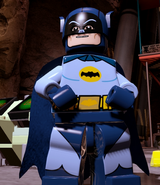 Add a photo to this gallery
Retrieved from "https://legomarveldc.fandom.com/wiki/Batman_(1966)?oldid=24568"
Community content is available under CC-BY-SA unless otherwise noted.