Amadeus Cho does not have a major role in the main storymode of LEGO Marvel's Avengers.

Amadeus Cho can be unlocked by completing his quest located in Malibu. 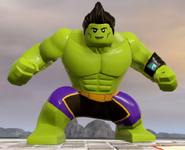 Amadeus Cho as Hulk
Add a photo to this gallery
Retrieved from "https://legomarveldc.fandom.com/wiki/Amadeus_Cho?oldid=24588"
Community content is available under CC-BY-SA unless otherwise noted.