Abomination is a marvel villain, the arch enemy of Hulk, who is a playable character in LEGO Marvel Superheroes.

Abomination is one of the many villains who aid Doctor Doom in his mission to create a weapon of mass destruction. His colour is a jade-green

Abomination first appears when Doctor Doom starts sending out villains to retrieve the "Cosmic Bricks" before the avengers do, and starts by hiring Abomination paired with Sandman to make their way into Grand Central and collect the cosmic bricks. Abomination and Sandman capture several hos. Iron Man and Hulk are called by Nick Fury to stop them. Whilst Sandman searches inside for the cosmic bricks Abomination comes outside to face Hulk who defeats him and throws him through the window.

Abomination appears later in the game in a prison cell sleeping with his teddy bear and is awoken when Iron Man, Hulk and Wolverine release a trap door from underneath him.

In the online show of "LEGO Marvel Superheroes: Maximum Overload" he appears in two episodes. His first appearance is in an episode where he is fighting Hulk on top of a plane which he rips in half (due to one of Loki's magical overloading snowballs) resulting in them falling onto a oil factory island, where Hulk defeats him. He also appears in the last episode imprisoned along with a majority of other super villains aboard the Hellicarier and is escapes with all the other villains by the Loki overloading all of them with his orbs.

Abomination can be unlocked through completion of storymode. 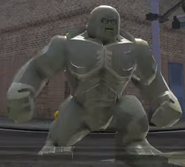 Abomination in LEGO Marvel Superheroes
Add a photo to this gallery
Retrieved from "https://legomarveldc.fandom.com/wiki/Abomination?oldid=24420"
Community content is available under CC-BY-SA unless otherwise noted.