A-Bomb is a playable character in LEGO Marvel Superheroes and LEGO Marvel's Avengers, whose secret identity is Rick Jones. A-Bomb is a big figure that is included in the DLC Preorder Pack.

Appearances in the Story

A-Bomb is not directly seen in the story mode gameplay but is believed to form an alliance with the Avengers, X-Men, and several other heroes to help defeat Doctor Doom and his team of villains.

A-Bomb does not have any major role in the story of LEGO Marvel's Avengers.

A-Bomb is a DLC character that can be unlocked only if you pre-order the game.

A-Bomb can be unlocked by finding his token in the Sokovia hub world.

A-Bomb getting ready to attack. 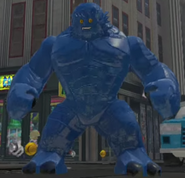 A-Bomb in LEGO Marvel Superheroes.
Add a photo to this gallery
Retrieved from "https://legomarveldc.fandom.com/wiki/A-Bomb?oldid=22805"
Community content is available under CC-BY-SA unless otherwise noted.