The main build of this set is a large figure made of connectable parts. The Batman figure is primarily blue and has plating on his torso and arms. He has protruding "wings" on the side that have individual spikes intended to resemble a bat shape. The Batman figure in this set has a large doubleheader blade. 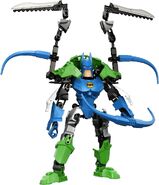 Add a photo to this gallery
Retrieved from "https://legomarveldc.fandom.com/wiki/4526_Batman?oldid=21941"
Community content is available under CC-BY-SA unless otherwise noted.